From ‘The Violet Mist’ by Siobhán Lally 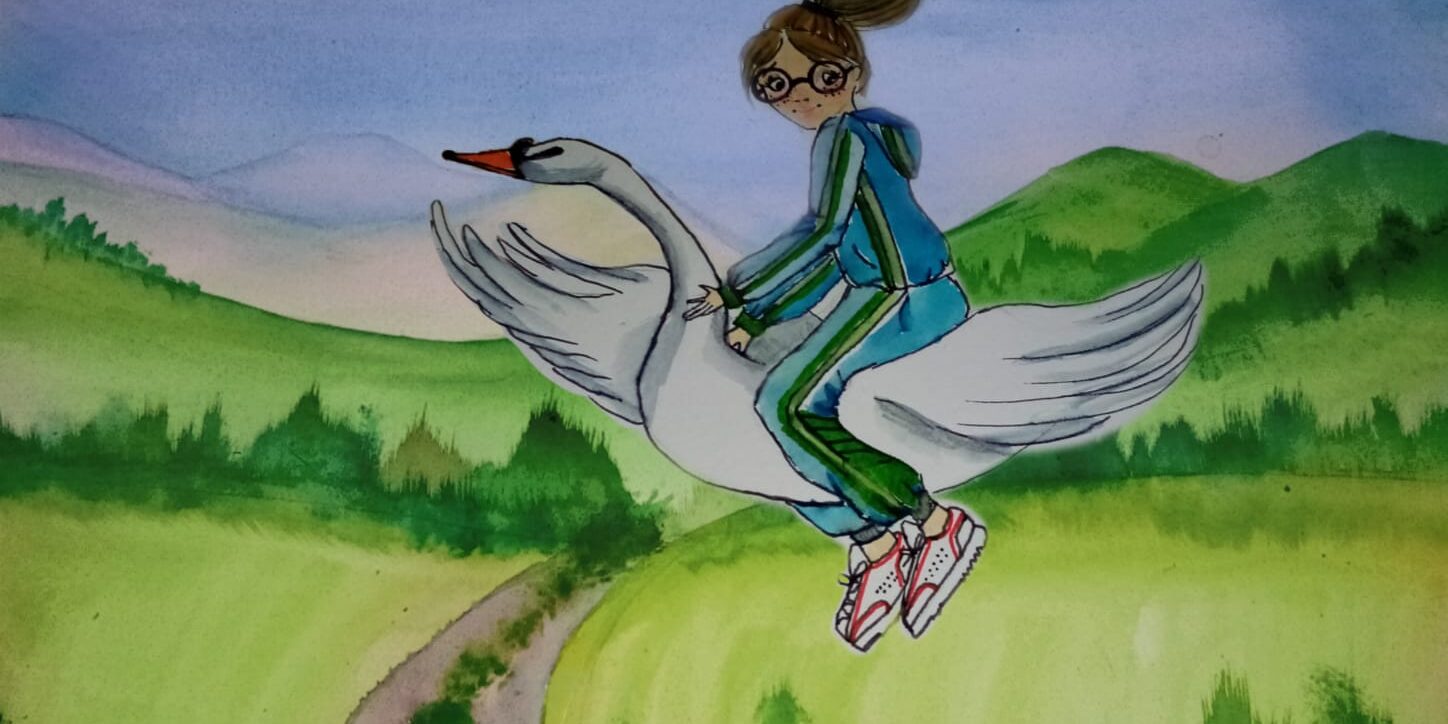 Laura Griffin wouldn’t hurt a fly. She really wouldn’t. She had an intense dislike of the gooey fly catcher that dangled menacingly from the kitchen ceiling. Despite several attempts to dislodge it with a sweeping brush, the thumb tack that secured the death trap in place, remained out of reach. As the body count rose, Laura resorted to preventative measures. At the first sound of buzzing, she’d jump up onto the countertop, risking life and limb, to open a window and shoo out the imperilled insect. She rejoiced in the ones who evaded capture, and she mourned the ones who weren’t so lucky.

Laura’s fly rescues caused much eye rolling and twirling of fingers at temples among her older siblings, David and Kate, who thought she was a ‘total weirdo’, and weren’t shy about telling her so. David was a cool 15-year-old whose main interests were his mobile phone and the occasional game of hurling with Kate, who was an almost as cool 12- year-old. Laura was only 11 months younger than her sister, but even though they were the same age for one month of the year, they were never equal in the family pecking order. She took up permanent residence in Kate’s shadow while her parents, James and Sally, centred their attention on her youngest sister, Molly, who was just a baby. Laura plodded along quietly in her own animal loving little world, until a rescue of a different kind, turned that world up-side-down… inside-out…front-ways… back-ways… and side to side.
Her unexpected upheaval began shortly after Christmas when she was in fifth class. It was an afternoon like any other with herself and Kate patiently waiting for James to come home from work. He always had a surprise for them. It could be anything from a packet of crisps to a new pony, so the sound of his car booming up the drive caused pandemonium.

“DADDY!” they cheered in unison and raced out of the kitchen like two puppies competing for treats. To prevent injury, Sally had introduced a ‘take turns’ policy which so far, was ineffective. As usual, Kate, the broader of the two, won the squeeze off and plopped out of the door frame with ease. Laura limped slowly behind her, rubbing her hip where a thump from her sister had connected.

“Daddy! She cheated! It was my turn to be first, but she pushed me and…”

“Don’t panic pet,” said James, nodding at the back of his car, “wait till you see what I’ve got for ye.”
Laura jumped up and down, forgetting about her injury.
“Hey everyone! Daddy’s got a surprise!” she called to Sally, David and Molly, who were in the kitchen. David was slouched on the small sofa scrolling on his phone, while Sally and Molly wrestled with a bowl of baby dinner at the table.

“What’s he got this time?” yawned David, not taking his eyes off the screen.

“God only knows!” sighed Sally. “PLEASE don’t let it be another donkey.”

She scooped Molly out of her high-chair and made her way outside.

“A baby lamb! A baby lamb!” squealed Laura. “OMG he’s soooooo cute,” said Kate.
“Just what I always wanted,” said Sally sarcastically.
“Aww Mom, can we keep him?” said Laura (the Griffin pets were always assumed male until proven otherwise). James stood beside the opened boot with a silly grin on his face.

“Tommy gave him to me!” he explained, deflecting blame to his brother. “One of his ewes had triplets and she’s not able to look after them all. This lad’s the smallest so he’d surely DIE if I didn’t take him!”

“I’ll look after him!” chirped Laura.

“He’s mine!” snapped Kate. “Tommy is my godfather so I’m sure he’d want me to have him.”

“That’s not fair, you don’t even like animals,” said Laura sadly. She was sure Kate would win again.

“We’ll all help,” interrupted James, “it’ll be grand. I’ll make a small pen for him in the corner of the shed. I just need to run into town to get a few bottles… oh… and some formula… and an infra-red lamp… and…”
“I’ll go to town, and you get started on the pen,”

instructed Sally, as if trying to get control of the situation. She continued to give orders but all that could be heard was –

It wasn’t long before the rest of Griffin’s menagerie arrived to see what all the fuss was about. ‘Betty,’ their Bernese Mountain Dog, bounded into the middle of the family gathering. She nudged everyone off balance with her big happy head and plonked her two huge paws either side of the lamb for a good sniff. ‘Lily,’ the grey cat, viewed proceedings from the safety of the windowsill whereas ‘Sheila,’ the black cat, jumped on top of the car for a closer look.

“Betty don’t eat him, you big lump,” said Laura, prising her dog away from the lamb.

The tiny lamb bleated loudly as he clambered unsteadily on his skinny little legs to get away from the large dog. James scooped him up and handed him to Kate. She held him in her arms and stroked his woolly head.

“UGH! He feels funny! He’s rough and greasy!” she scoffed, shoving the lamb at Laura.

David emerged from the house. “Cool,” he said and took a photo of the surprise to share with his friends on Snapchat. “C’mon Kate, let’s take a few shots before it gets dark.”

“Sure,” said Kate, and ran after him.

The crowd dispersed. Sally strapped Molly into her car seat and took off to town for the lamb stuff. James hurried towards the treehouse to gather leftover bits of timber he had been using to build it. Technically, it wasn’t really a treehouse, more of a small shed elevated on four timber supports, with steps leading up to it. It was built under a large tree rather than in it, but James was immensely proud of his workmanship. David and Kate grabbed their hurls and began volleying the sliotar to each other. The cats resumed their positions either side of the door, while Betty continued to sniff around the boot for more information about the newcomer. Laura was left standing on the tarmac holding the lamb. She couldn’t believe her luck. Normally, Kate would fight tooth and nail to get what she wanted, and Laura would give in to keep the peace. She gently stroked his little head. His coat was rougher than she expected, but he was still gorgeous. He climbed up along her chest and slobbered all over her face and glasses. His tiny hooves became tangled in her long mousy hair, but she just giggled and unwound him gently. She held him up in front of her face so that she was staring right into his pale hazel eyes. “MMMMMMMMMAAAAAAA,” he bleated back at her. Laura’s eyes stung with broody tears. It was love at first… bite! He chomped ferociously on her fingers with his gummy mouth. Laura guessing he was hungry, carried him to the lawn to let him run around while waiting for Sally to return with his dinner.

“Stand in goals for a while!” yelled David at her from the far end of the lawn.

“No thanks,” replied Laura, surprising herself that she had refused a game of hurling, albeit in goals, with David and Kate. “I need to keep this lad company until Mom gets back.”

“Suit yourself,” he grunted and pulled a face for Kate to see.

“Hey Lala, what are you going to call him?” mumbled James from behind the pile of timber planks he had in his arms. ‘Lala’ was everyone’s pet name for Laura – sometimes she liked it, sometimes she didn’t, depending on who said it. She hated when Kate or David called her it because it was usually in a mocking sort of way. Even Hannah the Horrible, Laura’s former best friend, used to call her Lala amiably, but now used it to taunt her at school. Hannah wasn’t always horrible. She and Laura had been best friends since junior infants, but lately she unfriended Laura and moved to cooler pastures where the girls had mobile phones. They’d spend their breaks on their phones not talking to anyone who didn’t have one. Laura was heartbroken. She didn’t have a phone. Sally wouldn’t allow her to have one until her 12th birthday, so she had an entire 11 months of phone-lessness before she could win Hannah back. Sally wouldn’t budge, even when Laura explained her plight. Her answer was always the same – “A real friend wouldn’t care if you had a mobile phone or not.”

Deep down Laura knew she was right, but she missed her friend and school was a lonely place on the fringes. Kate had already achieved phonedom and the coolness that came with it, so school was going to be unbearable especially after the Christmas holidays with all the new phone graduates congregating around Hannah.

Laura studied the lamb again. “Well, is it a boy or a girl?”

James dropped the timber and lifted the lamb’s tail.

“Hold on a second,” interrupted Kate. “I think we should all get a chance to pick a name. We should have a vote.”
“Aww no,” said James. “I think ‘Leo’ is a good name. Leo the Lamb! Brilliant! You won’t get much better than that now!”

Laura couldn’t believe it! ‘This day couldn’t get any better,’ she thought to herself.

When Sally got home, Laura gave Leo his much-anticipated bottle and then helped James put the finishing touches on the new pen. She laid him on the soft straw under the infra-red lamp.

“Snug as a bug,” said James. “Come on Lala you better get ready for school tomorrow.”

Up until a few hours ago, the very thought of school and her lack of a phone would fill her with dread, but now she had something better than Snapchat streaks.

“Good night Leo, see you in the morning,” she said, as she closed the pen door.

Betty and the cats gathered round the pen and huddled as close as they could to catch some of the heat from Leo’s lamp. Laura couldn’t wait until morning.