You are here:
Poetry Corner 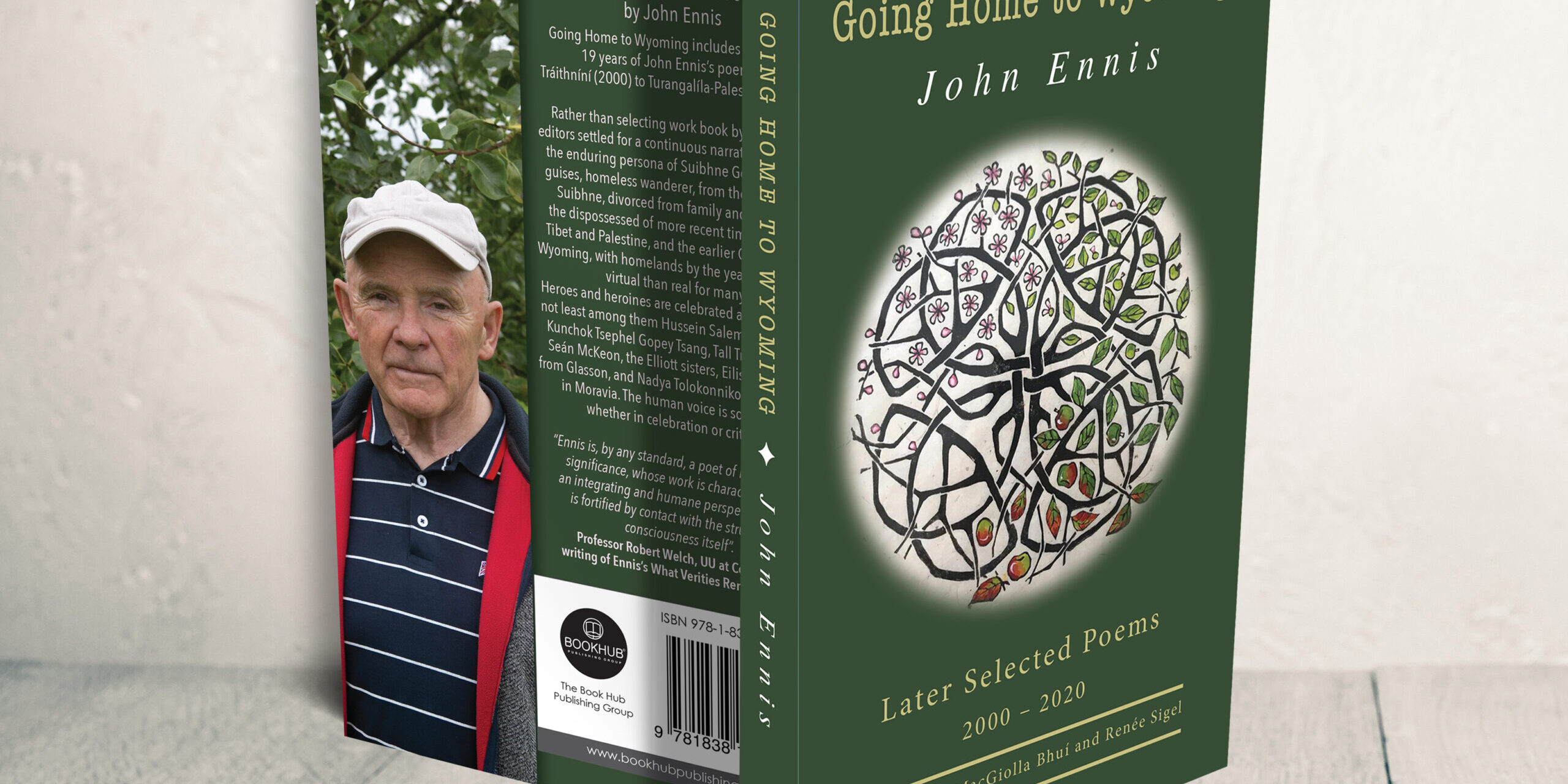 The selection is not chronological; rather, a thematic consensus informs the book. Poems from different books sit side by side: sometimes, a later title like “A Pin Drops at Coralstown” has for the author the force of a Yeshua Mount or Enlightened Benares. In others, composer Olivier Messiaen wanders in with his Abyss of the Birds at the beginning and conducts the ondes martinou of his sister-in-law at the end. 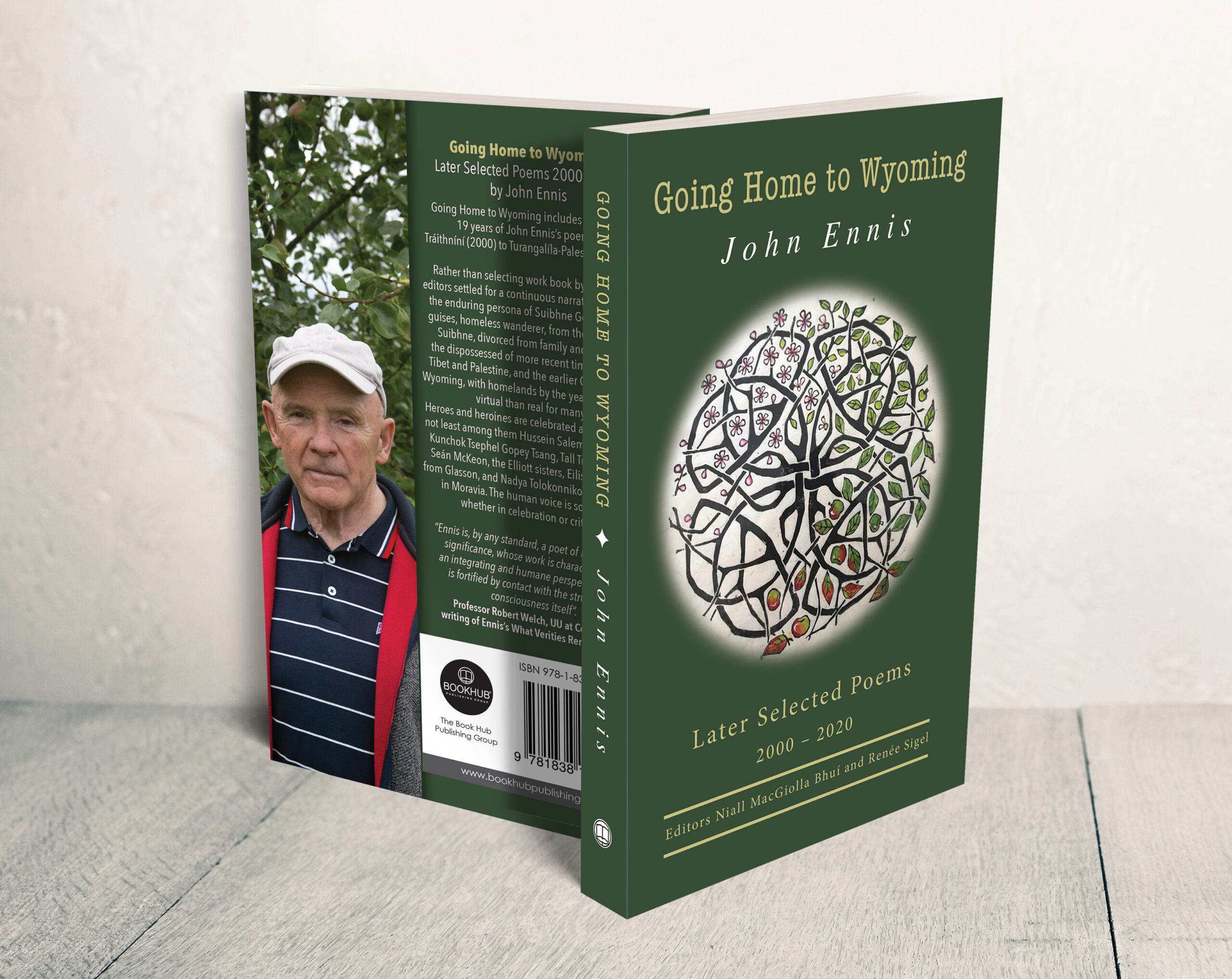 So, why the title Going Home to Wyoming?

‘Home’ is best when not even adverted to: the kid who dashes indoors from school to grab a bite before evening games presumes the concept. Home is at once virtual and real. It’s where the bed is with the camán under it. The food-strewn kitchen table or counter is a given, home is a site of living space and functional necessaria. A unit, a focus, most noticeable when under-the-roof relationships answer the tides with welcome periods of calm waters.

It is a rare home, race, community, or nation that is not betimes dislocated, even dismembered, or disremembered. There are the milder absorptions of people of other ethnicities, a cross-fertilization of the garden of the earth; the kind over which apiarists like to enthuse. This too takes time, lots of it; the ancient Irish narrative records a moment of confrontation of old and newcomer: “We’ll keep the hilltops, and you can have the souterains.” In time, some of the souterain or cave dwellers became lords of the hilltop.

Wyoming? Home once of the proud Cheyenne nation, the people of Cheyenne, who now comprise a reputed 1.6% of the total population there. The Cheyenne, whose breakout 1,600-mile trek north from the reservation is the stuff of John Ford’s Cheyenne Autumn. A cranky piece of work. Ford was old, ill; filming had become a torture, and he was not able always to get his own way. He didn’t like the score music (and there was too much of it). He couldn’t get the actors he wanted, or the many stills he wanted as reference points, scenes were cut he wanted in: add to his woes, the tatty cheap white-man’s brave new world splicing the movie in two. As recompense, he found plains and plain-talking Richard Widmark, whose devout belief never wavered in the People.

Home, then, or its antithesis, is at the core of the book, as in nears and dears “In Waves Before Them” and “Hussein Salem”. “The Carra Days” attempts a new clarity on the personal adolescence in the Fad of one Fintan Daly, brother of Ray of The Burren Days.

Suibhne’s wings are intended a fresh pneumatic: Suibhne, partnerless, missing his kids, a type of the restless, divorced, questioning, Cartesian spirit, never settling again. If the book demonstrates a titter of wisdom, this is mostly derivative of Nordic, Old Irish, Old English, the worlds of Beowulf and Icelandic Sìgúr Rós.