You are here:
Press Room 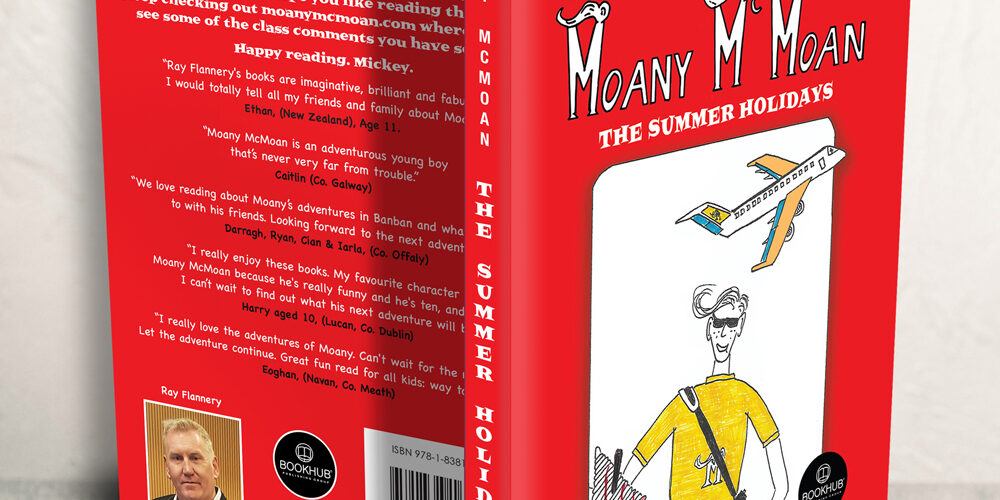 Moany McMoan…The Summer Holidays is the third book in the Moany McMoan series by Ray Flannery and is published by The Book Hub Publishing Group (bookhubpublishing.com), based in Galway, Ireland. Ray Flannery is a Dublin based Detective Garda, who a few years ago, through a fortuitous meeting in Dublin Airport with another Book Hub author, launched his career as a children’s book author in bringing his character Mickey “Moany” McMoan to life. This brought Ray into a new world as he found himself being interviewed on national radio by none other than RTE’s Ryan Tubridy, and also doing local press and media interviews the length and breadth of Ireland. Next stop was visiting schools, libraries and literary festivals around the country.

The first book “Moany McMoan…The Accidental Hero” told us of the antics of Mickey and his dreams of someday becoming famous. This, he managed to achieve but just not quite in the manner expected.

The second book “Moany McMoan…The School Tour” was launched a year later and also enjoyed great success. This involved affording Ray the opportunity to continue spreading the story of Moany and the mischief he gets up to.

Now it is time for the release of the next book in the series. “Moany McMoan…The Summer Holidays” is about to hit the shelves in late September and if you liked the first book, you are sure to love reading all about Moany’s biggest adventure yet where he moves back and forth between Ireland, the US and the European mainland.

We have teamed up with Ray and the amazing children’s charity, “Little Blue Heroes”, a Garda based charity, who do life-changing work in making the dreams of very ill children come true and a percentage of all profits from the sales will be going to this charity.

Endorsement for ‘Oxygenation is the Solution’ by Brian Lynch
October 27, 2022

Reflections on Getting Published
December 5, 2017