‘Pittsburgh and Ireland – The Connection Continues’ By Janice Lane Palko 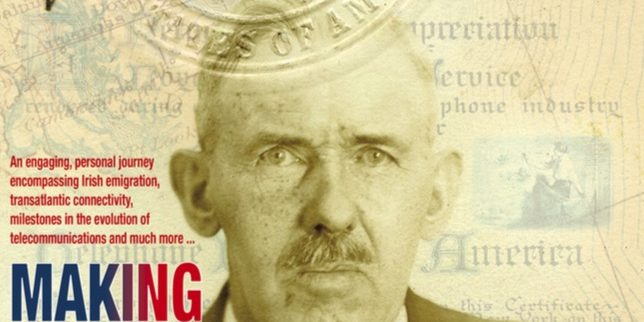 Pittsburgh and Ireland – The Connection Continues 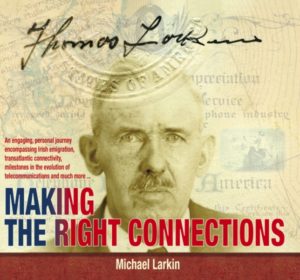 According to U.S. Census data, approximately one in six Pittsburghers is of Irish ancestry, making them the area’s second-largest nationality following only the Germans. With numerous politicians, clergy, business and sports figures of Irish descent in our history; one of the nation’s largest St. Patrick’s Day parade; and an annual Irish Festival, it has always been apparent that Pittsburgh has had a great connection to the Emerald Isle. But what is not often know is that, sadly, for many Irish immigrants who came to this area and to those family members left behind in Ireland, that connection was tenuous at best and severed entirely in many cases.

In his book, Making the Right Connections, Michael Larkin, a professional in the field of mental health with the Health Service Executive in Ireland and a writer takes us on journey that comes full circle to re-establish a lost connection with his ancestor Thomas Larkin. His path begins with Thomas, who was born in County Mayo on July 4, 1874. Like many Irish of that time, Thomas came to the United States seeking work. According to data cited in the book, an astounding two-thirds of that area left Ireland because of famine and dire poverty.

Thomas Larkin arrived in Philadelphia on May 25, 1899, and eventually made his way to Pittsburgh when he secured employment with the Bell Telephone Company of Pennsylvania, where he became a Telephone Pioneer of America, a lineman installing the telephone wires that would connect the country and then eventually the world. For his efforts, Thomas Larkin was conferred with Life Membership of the Telephone Pioneers of America on November 20, 1930, at a ceremony in the American Telegraph and Telephone Headquarters in New York, an honor that was only awarded to employees who had a long and distinguished career.

It wasn’t unusual for many Irish immigrants to the U.S. to lose contact with those back in Ireland for a number of reasons. Poor communication; before the advent of the telephone, it took letters many days or weeks to cross the Atlantic. Sometimes it was too painful for the immigrants to think about how they were forced to leave their homeland. Some harbored resentment that they had been made to leave and severed all ties, while some were so embarrassed by the abject poverty they experienced in Ireland, that connections were left to fade.

Thomas Larkin eventually lost touch with those still back in County Mayo, but he never lost touch with the longing for his homeland. After a time, he returned to Ireland, reconnected with his family, and became a pillar of his community. Until his death on March 4, 1953, Thomas lived an active and healthy life and was buried in the Larkin family plot in Killawalla cemetery in County Mayo.

Many people from the U.S. have gone to Ireland to reconnect with their forebearers, but Michael Larkin’s efforts, in exploring Thomas Larkin’s sojourn in the United States, is somewhat of a reverse to that. After having been invited to speak both in Ireland and in the United States on Thomas Larkin’s role in installing the wires that gave us the telephone, Michael came to Pittsburgh in 2016 and 2018 and has met with a number of influential people in the Pittsburgh/Allegheny region including members of the boards of Carlow, Duquesne, and the University of Pittsburgh as well as civil authorities sharing Thomas Larkin’s story and that of County Mayo. Michael was also invited by the President of the Fort Pitt Pioneer Chapter to speak at their luncheon in the John Heinz History Center. Perhaps more importantly, Michael spent time on the South Side, where Thomas Larkin had lived, even having his picture taken under the Larkins Way street sign there.

Connecting his past with the present, Pittsburgh with County Mayo, yesterday’s technology with today’s, has been a passion of Michael Larkin and that is evident in this beautifully produced book. As a native Pittsburgher of Irish descent, I could relate to how the connection to Ireland can be lost. I have always known that I was Irish, but due to untimely deaths, my family’s knowledge as to where precisely in Ireland my ancestors came from and under what circumstances were lost. I appreciated how Michael completed the circuitry for his family by coming to Pittsburgh to explore Thomas Larkin’s life here.

I learned a lot about what it was like in rural Ireland when the waves of Irish immigrants came to our shores. I learned what a revolution the introduction of the telephone to the world has been and how much of the technology we enjoy and take for granted now, would not have been possible without the foundation laid by the Telephone Pioneers, and finally, I learned things about Pittsburgh, which is surprising since I’ve lived here all of my life.

Remaining connected with family and friends, becoming involved in activities within our neighbourhood, connectivity with our diaspora, befriending an elderly person or neighbor in our community . . .this is real connectivity which has stood the test of time.

Embracing today’s rapidly evolving forms of technology is important. . . more important still, is never forgetting the simplicity of the spoken word. It’s all about ‘Making the Right Connections.’

*Making the Right Connections is available at: ww.bookhubpublishing.com/product/making-the-right-connections/

Janice Lane Palko is an author and her website may be found at www.janicelanepalko.com

‘Go Ahead Caller, You Are Through Now’ by Giselle Marrinan
August 12, 2019